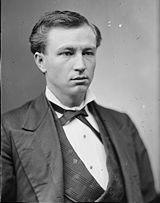 KENNA HOMES was named after United States Senator John Edward Kenna, who was born in Kanawha County, Virginia, in 1848 (before West Virginia became a state). He served in the Senate from 1877 until his death in 1893. He is one of two West Virginians to be honored with a statue in Memorial Hall in the Capital in Washington, D.C. Ex-Confederate soldier John Edward Kenna led the campaign to make Charleston the state capitol.

Kenna Homes Veterans Corporation was built in 1941 during the second World War to house veterans and war workers employed at General Machinery (now South Charleston Stamping and Manufacturing) and other plants in the Valley. During that time, there were more than a thousand children here, and Kyle Elementary School was built for them on Jefferson Road (the school now is the State Medical Examiner’s office).

On April 29, 1949, under the leadership of General Council Philip Hill, the Secretary of State of West Virginia approved the Articles of Incorporation (Charter) for Kenna Homes Veterans Cooperative Corporation. On April 16, 1976, the name was changed to Kenna Homes Cooperative Corporation, eliminating the word “Veterans”. The first incorporators were Vernon Seguin, Charles New and Thomas Swarbrick. The Articles of Incorporation authorized capital stock to be 400 shares of common stock with a par value of $400.

These apartments were built in 1942 by the federal government. They were built to house the defense workers and employees of the “war plants”, such as Carbide and Carbon Chemical Corp. during World War II. In 1947, the government declared the property surplus. The City of South Charleston had the opportunity to use the 29 acres for low-income housing, which wasn’t needed at that time.

The people who lived here did not want to move out. Some of them decided to Kenna Homes a private corporation. On April 29, 1949 an Organization meeting of the Incorporation of Kenna Homes Veterans Cooperative Corporation was held in the recreation hall of Kenna Homes. The By-Laws, Occupancy Contract and a loan from National Life Insurance were approved at this meeting.

No other wartime housing project in America ever became a cooperative.

What is Cooperative Housing?

Ownership of a share and the ability to occupy a unit may not be separated. Each unit carries with it the right to vote in the business of the corporation. A cooperative operates on the benefit of its members on a not-for-profit basis to provide the goods and services members need at the lowest practical cost. Each month, the members pay an amount that covers their share of the operating expenses of the cooperative corporation.

What is the difference between a Condo and a Co-op?

A condominium owner actually owns the apartment like any other homeowner, and owns an undivided interest in the common areas, the parking lots, recreations areas, lobbies and hallways.

In a cooperative apartment complex you don’t actually own any real estate. Rather, you own shares in a not-for-profit corporation. As a share holder you get the right to lease space in the building. The corporation owns the common areas. The effects of this are varied. Real property, for example, descends to your heirs while the co-ops tenant stockholder’s share pass as personally to your personal representative and may be subject to securities regulations. Generally, a condo is considered real property while a cooperative is considered intangible personal property.